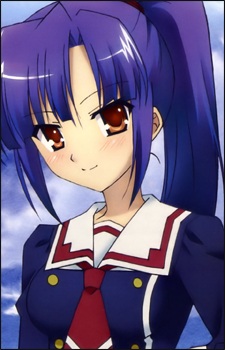 Kirika Ueno (上野 錐霞 Ueno Kirika) is the Student Council President and a classmate of Haruaki Yachi who is in possession of two Cursed Tools, one called Ginistrang's Love, and the other The River of Black Strings (or Tragic Black River). Both of these tools give her advantages in battle including the ability to not be killed by a fatal injury, though in exchange they come with terrible effects. She will die if she ever removes Ginistrang's Love which looks like a bdsm-style outfit, as for the other tool she satisfies the curse by using herself as a victim since the bondage suit will heal the injuries that Black River inflicts. Kirika feels disgusted with her body as she did not choose to have these cursed items placed upon her. She is also a reluctant member of a group founded by her older brother that has more than one name depending on the adaptation. This group studies and researches Cursed Tools as the ultimate mysteries to explore. She has a crush on Haruaki as she often competes with him over whose cooking is better during lunch period. He later finds out about her Cursed Tools, and what she must do in order to satisfy the curse of Black River. He isn't bothered by it though, and the trust further strengthens their relationship.

Kirika used to be part of an organization called Yamimagari Pakuaki's Lab Chief Nation who was tasked to observe Haruaki Yachi to research on the ability of Yachi House to lift curse from Cursed Tools as well as Yachi's immunity towards curse.

Add a photo to this gallery
Retrieved from "https://cubexcursedxcurious.fandom.com/wiki/Kirika_Ueno?oldid=4264"
Community content is available under CC-BY-SA unless otherwise noted.